Welcome to the Wisconsin River Meats
Video and Media Center.

We have been fortunate enough to have had National, State and Local videos produced. We also have annual publications, salutes and written articles to view below.

All of us here at Wisconsin River Meats were honored to have a national television network visit us for a day of filming and interviewing.

This video is a general overview about our business including our store and some of the different products and services we offer.

This short film is a short blooper reel made by the Discover Wisconsin television show production team after filming footage all day long. Many takes, many cuts and laughs for a fun day by all involved.

What The Heck is a Landjaeger?

Here is a nice video of Wisconsin River Meats filmed by some high school students as part of a project focusing on local business.

Filmed and produced by Lydia Bergeson and Kelsey Murray under the supervision of Gil Saylor and Eagle Vision Productions.

Below is a snap shot from the Landjaeger filming where some of Wisconsin River Meats employees get to yell "Summer Sausage!!" 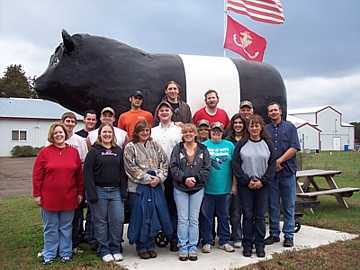 All About Summer Sausage